The Pee Wee Tigers battled the Redvers Rockets in the Final series of Provincial playoffs. Both teams played tough as the excitement grew in our little town, but it was not to be. The kids played their hearts out and held their heads high!
What a run! We are so proud of these kids. Well Done!

The Novice defeated Dodsland for the League Championship.  Way to go, Tigers!!   They went to Calgary for a Flames game on Saturday, March 17, to celebrate a great year. they won 2 major Novice tournaments in Kindersley and Battleford. They went to the final game in a tier one tournament in Saskatoon losing only to an Edmonton tier one team. Awesome year!

The Atoms unfortunately fell to Unity White in the final round of league playoffs.  They put up a great fight, but were unable to overcome the strong Unity bench in the 2nd game. In spite of fielding only 9 full time skaters, with some occasional help from a few Novice kids they went right to the the League finals. A much better than expected year.

The Bantams lost to Leader in their second game of the series. They won the game in Luseland but lost the series by 1 goal. The kids fought hard to take the game into the second OT period. The bantams had a great year in a tough evenly matched league, providing the fans with some great excitement. Well done!

Thank you to all the coaches, managers, team executives and volunteers, who worked hard all season to provide our kids with the opportunity to play this great game.
The 2006 – 2007 was a hugely successful season.

See you at the Rink!

The Unsung Heros of the Game

Thank you to the players who contribute to the success of their team by means other than goals and assists. Your contribution is recognized. The players who stop or reduce the goals against defensemen, defensive or grinding and back-checking forwards, and goalies; the players who effectively tie up high-powered, goal-scoring opponents; and the players who keep the energy and morale going in the dressing rooms and on the bench – these all contribute in immeasurable ways.   It takes all the players, and the roles they play, to make a successful team. We win as a team and we lose as a team. Team stats far outweigh individual stats. We do not keep complete stats on players and therefore these stats do not reflect all individual success. Thank you to the majority of the players who are a big part of the reason we are successful but may not be at the top of the stats!  Thanks to all!

Have you ever caught yourself yelling at the ref?

Are you yelling at young referees? Are you taking the fun out of hockey for the kids? Minor Hockey is to provide recreation and fun for the kids. It is not to provide entertainment for parents and it is not about winning at all cost. The vast majority understands this, but a select few can do a lot of damage.

Whether you are at home or out of town, please do not give the referees or the players a hard time. For a whole bunch of reasons, it is very bad. Minor Hockey across the country is developing a poor reputation because of the reaction of fans and some coaches. These kids are trying to learn the game too. We have lost many refs over the years because of the grief caused by fans, coaches and players. They find it is not worth it.

Anyone who has tried to line up refs for our kids hockey games knows how hard it is to get referees. If it were not for these kids, we would not be able to have games. Please consider this the next time you have the urge to yell at the ref!

The purpose of Minor Hockey is not about winning at all cost: Most Minor Hockey associations have adopted a philosophy of Fair Play for all.

Fair Play DOES NOT CHANGE ANY RULES OF THE GAME.
Fair Play ENCOURAGES ALL PLAYERS TO BE AS COMPETITIVE AS POSSIBLE BUT WITHIN THE RULES.

Fair Play is introduced to promote SAFETY and RESPECT, and a positive environment in minor hockey for participants involved. The four main participant groups are; the players, the coaches, the officials, and the parents (spectators). How these four groups interact at any game determines how positive, or how negative the event becomes.

There are an increasing number of concerns becoming more evident in minor hockey today. These concerns go against the principles of Fair Play, what minor hockey represents, and the objectives of recreational minor hockey organizations.

Some concerns in minor hockey are; the lack of respect for opponents, verbal abuse of officials, inappropriate spectator behavior in the stands, violence on the ice, the win-at-all-costs attitude, the increased pressure on young players to win, and the lack of FUN for many.

To learn more about the introduction of Fair Play in an association, visit the following links:

The Kerrobert Novice Tigers are the new Highway 14 league champions after defeating Dodsland in the final round at home. The Novice team had a huge year going undefeated in the league, winning two major tournaments and going to the final game in the Saskatoon Tier one Novice tournament. Their passing skills and high energy play made it exciting to watch. Thank you to the Novice team, the coaches, Dean Simpson & Trevor Kissick, the managers Alison & Curt Knorr, all the volunteers who helped throughout the year and all the fans who came to watch. It was a great year.

The Pee Wee Tigers also went undefeated in league play, easily handling their opponents. Their potent offence, outstanding defense and goaltending frustrated many opponents this season. They went right to the Provincial C finals and had a tight series with the Redvers Rockets, only to come up short. It was a valiant effort and a great experience for all involved. They handily won the Highway 14 League Championship. The kids will remember this season for the rest of their lives. Thanks to manager Howard Mitchell, coaches Brad Murphy, Gary Anderson and Todd Murphy who had them playing at a high level every game. What a ride!

The two Initiation teams made remarkable progress throughout the year, under the tutelage of head coach Brad Neumeier and his assistants Curt Kissick, Kevin Borschneck, Gerald Duhaime, Scott Osterhold, Daryl Frustuk and Jesse MacKinnon. Managers Cindy Kissick and Jim Cholin kept them organized. It was amazing to watch them go from falling every few steps to being skilled skaters and students of the game. Look out next year!

The Atoms faced Unity for the League Championship. Their high-scoring offence wasn’t quite enough and they lost in the final series. Thank you to the coaches Dave Morrell and Gord Thomson and manager Gerald Duhaime for great work with a short bench this season and for teaching them to overcome diversity. Thank you to the fans for their unwavering support. See you next season.

Hockey can be a heartbreaking game, and so it was for the KDL Bantams in the semi- final with Leader. They took it right to the second overtime period with a hard effort and enough opportunities to put the series away, but Leader came back to win the series by one goal. In a very entertaining season, the KDL Bantams went to battle every game. The kids are to be commended for the effort displayed, and for never giving up. They had a successful year playing .500 hockey, but most of all, the games were fun to watch and always close in a very tight, closely matched league. Coaches Angus Phillips and Don Cholin and manager Warren Morris dedicated countless hours, had high expectations, and helped them learn that in hockey, as in life, things don’t always go as planned. Thanks for the memories.

Kerrobert Minor Hockey extends heartfelt gratitude to all the coaches, managers, referees, rink manager Joe Pittari, booth coordinator Del Marie Kissick and her entourage, and the countless volunteers who work hard every day making hockey a great pastime for the participants and spectators of the game. Their efforts didn’t go unnoticed; they contributed to an exciting, entertaining and very successful year. Thank you to all the fans who gathered at the rink and supported this great game in our town. Here’s to you! See you next year! 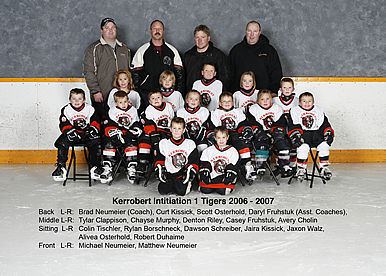 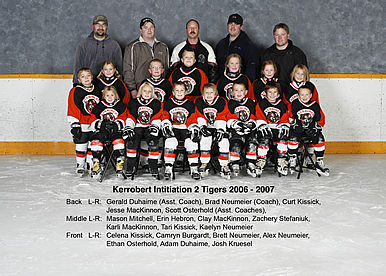 This year has started off with quite a bit of confusion with all the kids on one team. After a couple of weeks seeing how necessary it was, the 27 kids were split into two teams as there are three skill levels at the initiation level. Brad Neumeier is head coach for both teams. Assistant coach for team 2 is Curt Kissick. Team 1 is Kevin Borschneck and Gerald Duhaime.

On December 2, a Timbits Jamboree is organized for Kerrobert with Dodsland joining in the fun activities for the kids. It is a way to promote the game of hockey and the Minor Hockey Assocication. This is also an excellent opportunity for coaches to be able to see, learn and work with certified SHA course conductors.

Team one has 4 games total throughout the year and end off with tournament in Luseland on Mar 3. Team 2 has 12 games with a tournament ending in Unity on March 3. Both teams play parents for their final day of hockey in mid March. Come and watch the fun! 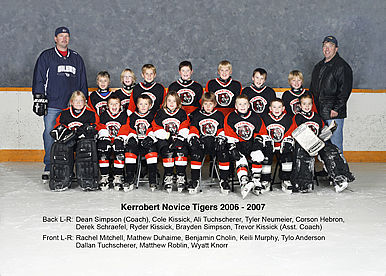 On December 3 the Atoms played a hard working Unity team in Unity.
Kerrobert lost the game, 2-8.
Goal scorers for Kerrobert were #16 Ryder Kissick and #9 Thomas Duhaime.
Dawson Morrell chipped in with an assist.
In goal for Kerrobert was #31 Quenton Flahr.

This was an exciting game for fans and players alike. Great sportsmanship was demonstrated by all.

December 9 saw the Atoms in Macklin playing the Blue team. The well prepared Atoms worked hard defeating Macklin Blue 4-2.
It set out as a tough game with a short bench. The team had eight (8) skaters and a goalie. Macklin had four (4) players than Kerrobert, making their bench somewhat deeper.
Goal scorers were # 4 Jacob Mitchell, # 6 Hunter Thomson, # 9 Thomas Duhaime, and # 11 Darin Sperling.
Assists went to # 4 Jacob Mitchell, with 2, # 9 Thomas Duhaime, # 14 James Semilet, and # 21 Matthew Stefaniuk.
In goal was # 31 Quenton Flahr.

They were most certainly a tired group by the end of the game. 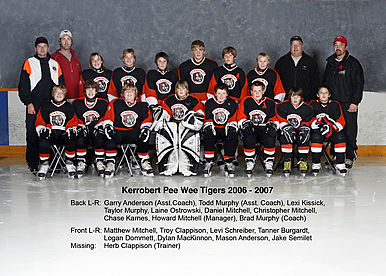 Kerrobert Pee Wee Tigers are having a big year. Coached by Brad Murphy, assistants, Todd Murphy, Gary Anderson and Managed by Howard Mitchell they have yet to loose a game this year.

Led in scoring by defenceman Taylor Murphy and rock solid goaltending by first year Tanner Burgardt these Pee Wees are tearing up the Hwy. 14 League and redefining the game.

Come and watch the high flying Pee Wees in action! 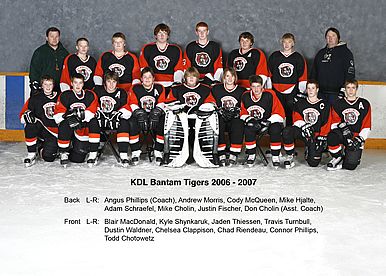 If you can’t make a game call me asap. Managers please call your scheduled refs close to game date to confirm.A list of refs follow has already been sent.

Kari Thomson is scheduling and arranging for referees for scheduled league games. Team Managers will confirm their Referees one or two days before the game. Tournaments and Playoff games will be up to the team to schedule.

We must support our referees in this year of enhanced rule enforcement. This is a tough job and like all of us, they learn as they go.

Many thanks to all of our referees!

If you would like to help the Minor Hockey Association in Kerrobert either by sitting on a committee, being involved in public relations or volunteering to help at any of our fund raising functions please contact a member of the executive.

Thank you for making hockey better for the kids!