It started on Friday night in Kerrobert where a packed arena witnessed the undefeated KDL Midgets Hosting the Semi Finalists Foam Lake! KDL was only up by one goal coming home from the first game. The Flyers would open the scoring before Mathew Duhaime would erupt the already screaming crowd. From there they never looked back. Duhaime would pot 2 on the night and Tylo Anderson would light up the board 3 times with his magic. Lyndon Kloster, Reid Kissick, Ryder Kissick and Mitch Bradley would round out the scoring to ignite the crowd 9 times and ensure the celebration. KDL ends a perfect season with a Midget C Provincial Title, a League Title and an undefeated season!

Saturday saw a fast skating extremely rough affair in Unity for the Midget AA Provincial finals. The Unity AA Lazers came out hard with bone crushing hits to take on the Hounds of Notre Dame. After coming home tying the Hounds in game one we saw end to end skating and passing and razer sharp goal tending in game two. Either team could have opened the scoring but Notre Dame captured first blood. Notre Dame started to creep ahead in the third and opened up a crack that was too much for Unity to repair. A tough, physical, entertaining game with Unity ending a hugely successful season down 5-2 on the score board.

After that wild game the Unity A team took on Yorkton in the Final SHA Midget A Provincials. Unity being down a goal from the first game, opened the scoring and then went up 2-0 to take a one goal lead and held that lead until 5 minutes left in the third. Yorkton then slipped one behind Unity’s minder to deadlock the series and forcing sudden death overtime. The first overtime period ended with no scoring. Only in the second overtime period, after huge chances at both ends of the ice, was the local crowd suddenly stunned with a heartbreaking defeat at the hands of the Yorkton Manos. A day of amazing hockey! 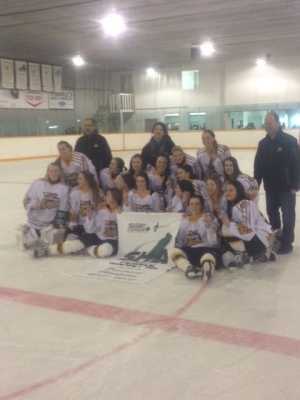 Why I Quit Hockey: A letter to his parents
http://www.afterthewhistle.com/en/Editorials/
20022003/whyiquithockey02.htm

Wow! What a great tournament on the weekend! Special thanks going out to Tara MacKinnon and her crew on all the hard work they put in organizing raffle table, toonie stick, etc. Thanks to the parents for their prize donation, and to Enbridge for helping us out in the donation department as well 🙂

KL Peewees had a good first game of the year in Battleford. We were in the lead going into the third period but the boys ran out of gas and lost 6-3 .

Wilkie came to town for minor hockey weekend and we won 6 – 5 . Way to go boys!!

Good battle in Luseland against Macklin blue. We were up for most of the game but Macklin fought back for a 4-4 tie. Good work boys.

Fun tournament weekend for the KL Peewees! We ended up in the A final with Macklin white. The boys played hard but ended up 3-2 for Macklin. Good jobs guys!!

Boys had a good game @ Battleford 4 and won 8-6. Good luck next weekend with back to back home games with Battleford 2 & 4.

Good games with Battleford teams on weekend. We lost 6-3 against Battleford 2 Saturday & won 4-2 on Sunday to Battleford 4. Good teamwork boys!

Feb 11th — KL Peewees won round one with Battleford 4 and move on to Macklin blue for round two of playoffs for B side. Times TBA. Good luck boys!!

They now play Eston in the 1st round of playoffs. Game #1 in Kerrobert February 10th @ 6:30 pm. Come on out and cheer on the Peewees.
KD Peewees lose game #1. 4-2
KD Peewees tie game #2. 2-2
KD Peewees lose 1/4 final championship series.
They now move on to focus on SHA Peewee C provincial playoffs.

Kerrobert Officials please be at games 45 min. before games.